A review on Deep Reinforcement Learning for Fluid Mechanics

When I started an Internship at the CEMEF, I’ve already worked with both Deep Reinforcement Learning (DRL) and Fluid Mechanics, but never used one with the other. I knew that several people already went down that lane, some where even currently working at the CEMEF when I arrived. However, I (and my tutor Elie Hachem) still had several questions/goals on my mind :

The results of these questions are available here, with the help of a fantastic team.

Applications of DRL to Fluid mechanics

Several Fluid Mechanics problems have already been tackled with the help of DRL. They always (mostly) follow the same pattern, using DRL tools on one side (such as Gym, Tensorforce or stables-baselines, etc) and Computational Fluid Dynamics (CFD) on the other (Fenics, Openfoam, etc).

Currently, most of the reviewed cases always consider objects (a cylinder, a square, a fish, etc.) in a 2D/3D fluid. The DRL agent will then be able to perform several tasks :

A small step into the world of fluid mechanics

This equation is quite a paradox itself. Its application are enormous, but we still don't know if solutions always exists (it is even one of the seven Millenium Prize Problems).

Solving the Navier-Stokes now doesn't mean we are trying to solve it. We use the finite element method to 'slice' our domain into small parts, and starting from initial conditions, we run our simulation, making sure our equations are 'approximatively verified' every (little) timestep.

This agent can perform these tasks at two key moments : (i) when the experiment is done, and you want to start a new one, (ii) during the experiment (i.e., during the CFD time). One is about direct optimization; the other one is about continuous control. A few examples can be seen below :

Leader and Follower swimmer reproduced from Novati et al. (2017), with the displacement and the orientation between the leader and the follower.

Fluid jets to control rigid body reproduced from Ma et al. (2018). The position and orientation of the jet are DRL controlled.

and even this video. (which is pretty amazing)

My own test case

In order to dive deeper into the subject, I wanted to try a test case on my own (with the help of Jonathan Viquerat at the beginning though). We took inspiration from this paper and considered a simple case: a laminar flow past a square. Now, it is convenient to compute the drag of this square (in this very set-up).

However, the question asked by the paper was: if we add a tiny cylinder, somewhere close to the square, could we be able to reduce the total drag of both the square and the small cylinder?

The answer is yes, and the result is shown below: 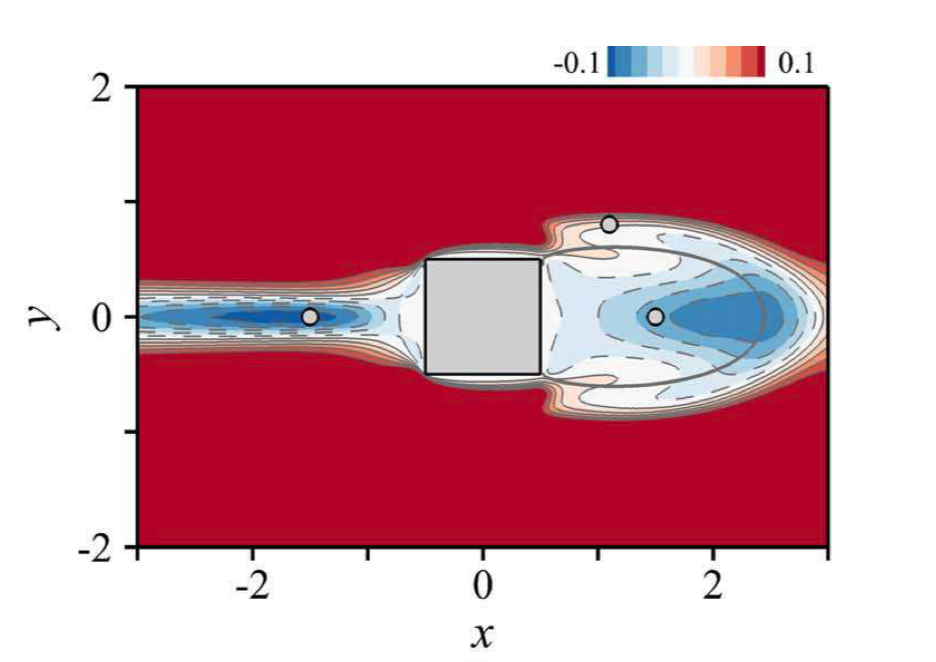 Variation of drag induced by a small control cylinder at Reynolds = 100, reproduced from Meliga et al. (2014).

Now, of course solving this case with DRL was interesting, but I wanted to see if more was possible (since the case was already settled technically). Several ideas were possible (thanks to discussions with peoples from the CEMEF and the review I did previously) :

Regarding the first point, I found no particular difference between direct optimization and continuous control. Both agents converge and find almost the same optimal final positions.

Continuous control over 17 time-steps at Reynolds = 40 and 100, from two random positions.

I used an autoencoder but had no time no compare results with and without it. I do have to explain why an autoencoder could be of any help here. The agent needs observations, and when dealing with fluid mechanics, the fluid characteristics are significant observations.

However, they can be of very high dimensions (more than 10,000). The Neural Network (NN) we would deal with would then be incredibly vast. In order to surpass this issue, an autoencoder could be used to extract simple features from high-dimensional fluid fields. It does seem like using as many fluid features as possible (which is possible with the autoencoder) is the best thing to do: 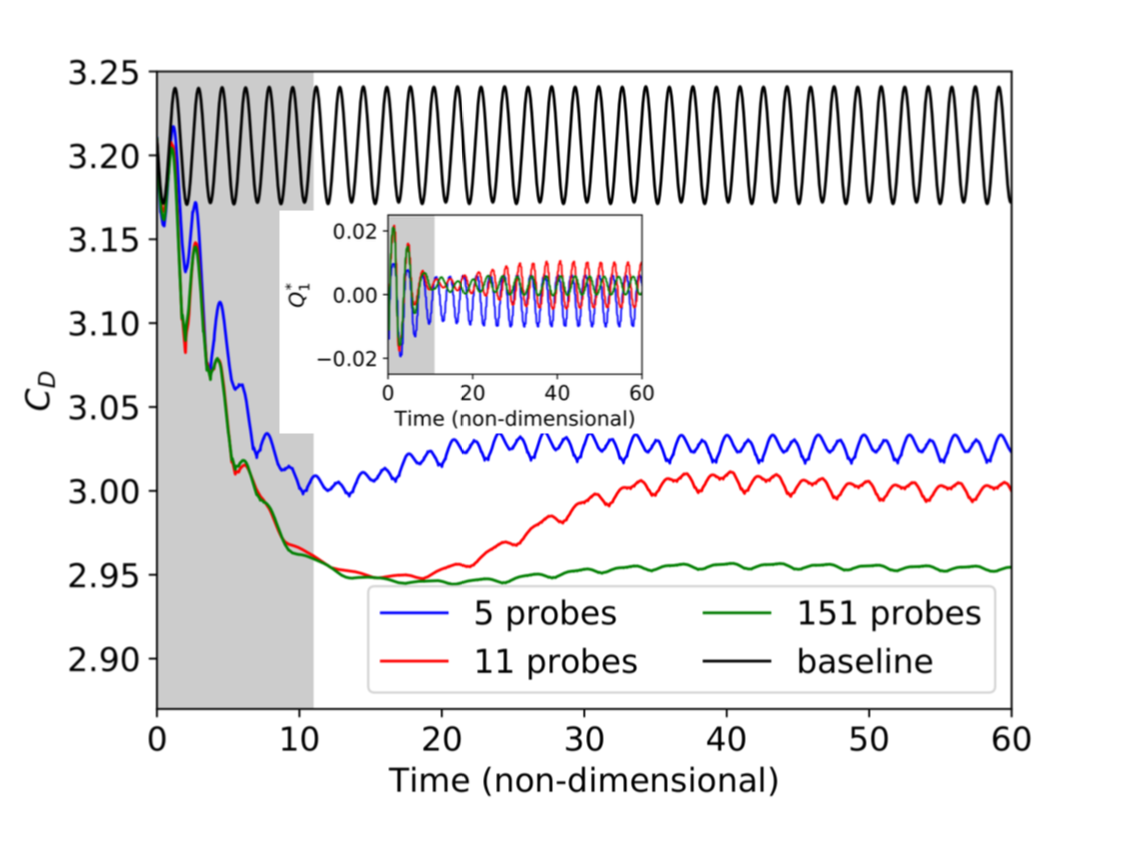 Value of the drag coefficient with active flow control reproduced from Rabault et al. (2019). It is important to see that the more pieces of information we give about the fluid (i.e., the more probes we give the agent), the more performant it will be. Being able to give everything without exploding the size of the neural network is therefore super valuable.

In total, I trained six agents, as shown below :

As you can see, I used transfer learning and obtained excellent results from it: the agent was learning from 5 to 10 times faster than the agent trained from scratch. This is an exciting feature in general, but especially for Fluid Dynamics, where CFD is computationally expensive.

At the beginning, my goal was to find out if such a library could be built (in a reasonable amount of time). During the creation of my test case, I realized the biggest issue with such a library was coming from the CFD solver: not only no one is using the same, but they all are pretty different.

For my test case, I based my code on Fenics, an easy-to-use solver (and super convenient since you can use it directly in Python). The code is available here. It is supposed to be as clear and re-usable as possible. It is based on Gym and stable-baselines.

With stable-baselines, I used their DRL algorithms implementations, and finally, as I said earlier, I used Fenics to build my test case using custom class that I hope will be re-used for other test cases. They use three main class: Channel, Obstacles, and Problem :

Basically, this is the box you want your experiment to take place in. You only define it by giving the lower and upper corner of the box.

This is the objects you want to add to the previously seen box. If you only want to use Fenics, you can only easily add squares, circles, or polygons. However, if you want to add much more complex shapes and mesh, you can use the Mesh function from Fenics.

This is where everything is taking place: setting up the box, placing the several objects, defining the boundary conditions, etc.

However, this is not getting even close to a true DRL-fluid mechanics library, the issue being Fenics. While being very easy to use, it is a slow solver, and it would be impracticable to use it for a challenging problem. This is why, with other people working at the CEMEF, the goal is to build this library, linking DRL with other CFD libraries, most of them being C++ based.

In the end, we now have a better overview of how DRL can be used to help Fluid Mechanics problems. Moreover, several important features can be kept in mind: transfer learning, autoencoder, LSTM, and so on. If the goal of building a real DRL-CFD library was not achieved, the way it could be possible is now much clearer.